From Macho to Make-Up: Shifting Gender Ideals in South Korea

Centuries of conservative morals and Confucian culture has led to a traditional sense of gender in South Korea. Gender roles are still widely very stereotypical and the ‘macho male’ image still prevails across the country – yet South Korea is the male make-up capital of the world. It has the largest market for male skincare than anywhere else– even though there are only approximately 19 million men in South Korea.

Some gender stereotypes are starting to shift away from the stringent gender roles that were previously considered ‘the norm’, as many South Korean men are now turning to skincare and even make-up to enhance their image. It is suggested that these gender shifts began in the late 1990’s when the South Korean government relaxed a ban on cultural goods from Japan. This exposed South Korean men to different standards and ideas of male beauty.

The beauty industry is a highly profitable one and parts the public with their money regardless of what country it is in. Nevertheless global economic troubles seem not to have any impact on the men’s beauty industry in South Korea. Sales of cosmetics for men and male skincare are on the rise. In recent years the market for beauty products for men in South Korea has emerged and has been widely embraced which has led to its considerable growth.

According to market research from Euromonitor International, in 2011 South Korean men spent roughly $493 million (US dollars) on skincare. This massive figure accounted for almost 21% of global sales that year. Of the approximate male population of 19 million men in South Korea, it is estimated that at least 1 in 10 wear make-up and this number is likely to increase.

Amore Pacific, South Korea’s largest cosmetics company expects the number of men who use skincare products and/or wear make-up to dramatically increase. They predict that South Korean men will spend roughly $850 million (US dollars) on these products this year alone.

It is universally known that stars wear make-up regardless of gender or nationality. Both male and female K-pop stars, actors and actresses and models wear make-up for their professional careers. It is also widely accepted that females (whether public or stars) wear make-up and use skincare products in their everyday lives. But now the male population of the South Korean public are joining in.

These so called ‘flower men’ are becoming more and more prevalent on the streets of South Korea. ‘Flower men’ are categorised as exceptionally good looking young men, and the phenomenon was arguable made popular by Ahn Jung-Hwan, a South Korean World Cup soccer player, in 2002.

This lifestyle trend is more associated with urban populations than with rural ones, with Seoul being the obvious example. It is not unusual to find South Korean men wearing the most basic of make-up in their everyday lives. These products can include, but are not limited to, concealer, foundation, mascara, eye shadow and brow pencils. BB cream is perhaps the most popular product for men. It was originally designed for the plastic surgery industry, so that patients could hide minor surgery scars and reduce the appearance of redness after dermatological procedures. Now it is used worldwide by men and women alike. 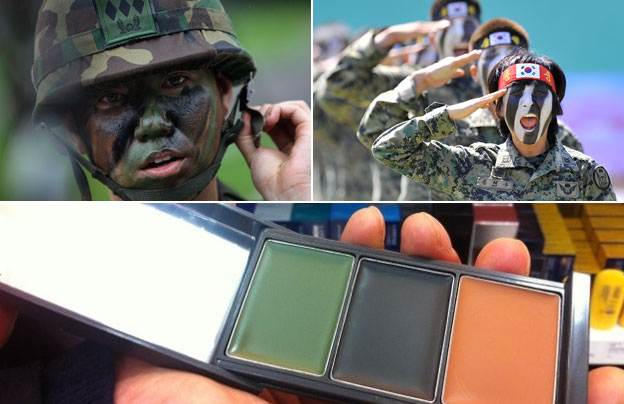 Amore Pacific currently has 17 brands for men with dozens of products available. It also has two ‘Manstudio’ stores in Seoul dedicated purely to men’s skincare and make-up. They even offer their own branded camo-paint for men to use during their 2-year mandatory military conscription service. The benefits of this brand over standard regulation camo-paints are that Amore Pacific’s one is kinder and gentler on the skin. Soldiers have also openly admitted to using make-up such as BB cream due to its SPF properties as they are out in the sun a lot during their service. Soldiers are not the only ones who are wearing make-up in their professional career. Korean Air holds annual male make-up classes for all of their male staff at Incheon International Airport.

There is no doubt that some South Korean men are now wearing make-up, and a lot more are using skincare products such as cleansers, anti-aging creams and eye creams, but the question is why?

South Korea is a deeply competitive country. It has already been established that its focus on beauty and presentation is paramount. In a society that values how a person looks just as much as the substance of their academic achievements and personality, first impressions are vital.  When the decision for those who are successful in their endeavours and those who aren’t is being made, it could come down to something as simple as: who looks better?

Using make-up and skincare products to cover spots, tired eyes, scars and other undesirable aesthetic features has become relevant to boosting fortunes, social lives and company in a society that holds personal appearance in such high regard. Handsome, flawless and fashion conscious men saturate the media in South Korea, and the image of a beautiful man is unavoidable. Male K-pop stars now endorse make-up and skincare brands and it is commonplace to see advertisements for male beauty plastered all over large cities in South Korea.

Plastic surgery is already rampant in South Korea for both genders and the pressure to look flawless and perfect is already overwhelming. Personally speaking, I see no problem with men wanting to wear make-up to enhance themselves, but when it’s done due to societal pressure it begs the question: How far will this go?

What are your thoughts on make-up for men and the current beauty standards for both genders in South Korea?

This is part of a series of posts on body image and gender in K-pop and Korean society.