‘Code Name Jackal’ (or ‘자칼이 온다’) is a new release from director Bae Hyung Joon and is a comedy with a slight twist of action and espionage mixed in.

The film has a relatively small cast in terms of numbers, but it is carried through by Song Ji-Hyo and Kim Jaejoong. 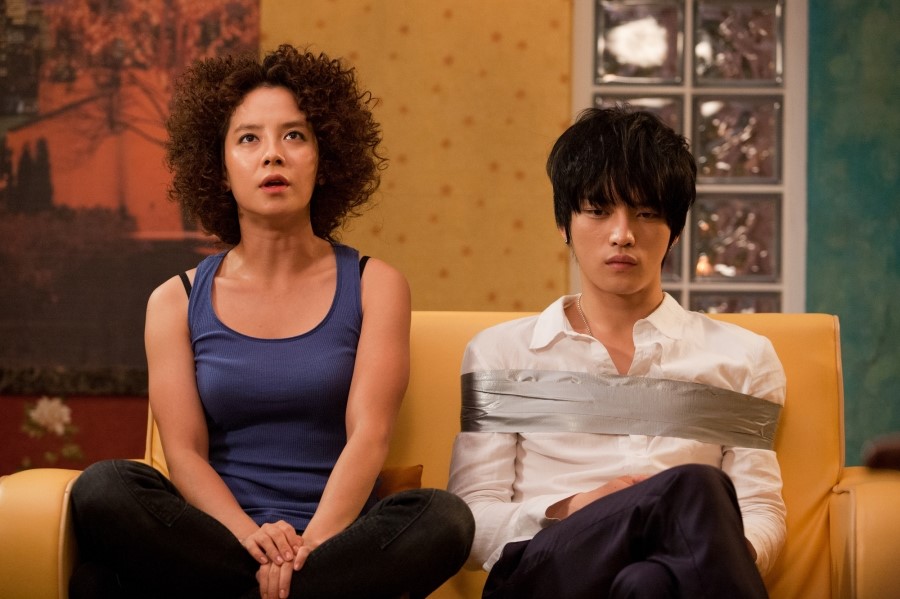 The plot surrounds Bong Min-Jung (Song Ji-Hyo), a clumsy and awkward hit woman who is hired to kidnap and kill popular Hallyu star Choi Hyun (Kim Jaejoong). When it’s revealed that Choi Hyun is Bong Min-Jung’s favourite star, and that her employer is none other than Choi Hyun’s ex-girlfriend, the two develop and forge a strange and confusing relationship. Meanwhile, in the same hotel as captor and captive, the police are on the hunt for the killer known as ‘Jackal’.

Professional Korean critics had very few positive things to say about this movie, yet despite this it did really well overseas. Before its release, it was bought by six overseas film distributors in Japan, Thailand, Singapore, Indonesia, Malaysia and Brunei. The whole tone of the movie is very light-hearted and has no real meanings and does not challenge the viewer, so I understand why hard-core critics didn’t like it. However, it is a fun, silly and innocent movie that is great when you want to be entertained, not challenged. The acting is also fun to watch and well-directed – Jaejoong has already proven himself as an actor with ‘Protect the Boss’ and ‘Dr Jin’. Jaejoong had commented in an interview that he blended a lot of his personal self into his character, so it’s no wonder that the stalker scenes and his reactions seem so realistic. Even the acting from minor role characters was really believable, especially the stalker and the policemen.

Having said that, there are places where the film lacks. The story had so much promise to make this film really stand out from the crown. The ingredients were all there: kidnapping, a female killer, a Hallyu star, a police hunt and stalkers, yet the film never reached its full potential. There were several repetitions in the plot that got irritating after a while, for example, Choi Hyun doesn’t just escape and get recaptured once or even twice, but multiple times. The pace of the story kept changing from fast to slow in a way that made the movie seem like a first draft rather than a finished product. The ideas were all there, but they were put together poorly and it seemed that whenever the plot lacked, the director would focus on Jaejoong looking hot to carry the narrative (the scene where he is tied to the bed demonstrates this point nicely). The story did have a pretty good twist at the end, but it was let down by how it was edited together. Instead of doing the twist justice, it felt rushed and a re-watch was necessary. Perhaps the biggest issue I had with the story was that there were too many going on at once. I think this story would have worked better if it was a TV drama rather than a film. That way all of the side stories could have been explored more and the audience could be satisfied. With a TV drama, the stories involving the police, Angela, the seemingly dual personality of Bong Min-Jung and the relationship between Choi Hyun and his ex could have been given the attention that they deserved.

The other major issue I had with this film was the editing. To be blunt, the editing was awful. Above the other minor flaws of this movie, the editing really let everything down. I feel that if the editing was done better, the story may not seem so confusing at times and leave the audience wondering what just happened. I had to re-watch parts because of the editing in order to keep up with what was happening. It got frustrating and it really did seem like amateur work.

To sum the film up, it’s nothing breath-taking, it’s certainly not a cinematic masterpiece, but it’s a fun watch. It’s not a laugh-out-loud comedy, but it will have you smiling. It’s full of hot scenes of Jaejoong to compensate for any shortcomings, and at times seems like little more than fan service – but it’s still worth the watch.

Oh, and one more thing, the warning I never got and wish I had: brace yourselves for the toilet scene.